Review:
The New Texas Giant, sometimes referred to as NTAG, is the perfect rollercoaster, IMO. Others argue that the Iron Rattler, or El Toro are better. No. Just No. The Texas Giant is and forever will be my favorite rollercoaster. And here is my review of it.

As I approached the beast, I got a major lump in my stomach. I remember braving the old TG and looking at the drop in awe. And then there was this. Holy crap. It might be the single most intimidating first drop I've ever seen. Alright, maybe not. Millenium Force's drop is two times this length, but compared to the old giant, my god... Anyway, as we walked through the unfortunately rather unthemed line, I couldn't help but notice the how each turn in the first half was banked at 90 or more degrees. I was again amazed at the difference between this and the old giant. We got to the Texas themed station and was just amazed at the amount work they had done on the old girl. The whole station had a real 1960's garage theme, complete with Cadillac Deville's has the actual trains. We boarded the back row, I took right side. The bucket seats and amazingly comfortable lap bar helped my nerves. And we were dispatched. As we climbed up the relatively fast and quite lift, you get a pretty great view of the park. Enjoy it while you can, cause as we crested the lift, a great pop of air is followed by a terrific first drop. After this, you fly up into the double up before the first overbank. A fantastic pop of ejector air is felt before the first, and least forceful of the three turns. A nice pop of air is felt as you exit the element. You fly up again into the best moment of the ride in IMO. The second over bank provides great laterals and AMAZING EJECTOR AIRTIME. I MEAN AMAZING.  Nothing can change my opinion about that. You then fly into the third 112 degree overbank. This one is the least memorable of the three because you fly through it so quick you don't get to appreciate be sideways. Then you hit the second best moment of the ride, the little bunny hill before the MCBR. It delivers again straight up fantastic air. You then turn into the MCBR, which is hardly ever on. You quickly dive out of the run, into a diving drop that felt especially fun. You then hit a relatively floater airtime hill, and then a great ejector drop under the lift. You continue to get mostly ejector air through the next few bunny hops and then head for the tunnels. MORE ejector air is met in the tunnels, and the magic carpet finish is one. You continuously gain speed as you hit more airtime, and fly into the brakes. Breathe.


The New Texas Giant is straight up incredible. 10/10

Accident: I was there on the day of NTAG accident. I'm going to make this short and sweet. This is tragic accident and my heart goes out the family, but we can't ponder in the past. The Giant will reopen and I will continue to ride it. And that's that.
Posted by Unknown at 2:33 PM No comments:

Please Note, this post is complete speculation, and nothing is confirmed except for the CONFIRMED RIDES

CONFIRMED RIDES-
Banshee at Kings Island-  I think the ride looks great. I especially love how it works with now gone Son of Beast site. I just hope it packs some forces.
Project Helix- Looks amazing. I think Mach rides is going to get big.
Unconfirmed-
Great America 2014- Rumor has it that Great America will be getting a RMC Hybrid or Topper Tracked ride that will be 160 ft tall, 180 ft drop at 85 degrees, and five inversions.
Six Flags Mexico- Iron Medusa- Another potential RMC ride. Medusa at SFM is closing to begin it's renovation very soon.
Great Adventure- Something will be coming to the park this year. My guess would be a giant drop tower, though rumors stretch from a giga coaster to updated kids area.
Over Texas- It seems like the original Six Flags park is well overdue for a new ride. I believe a B&M wing rider is in store over near the old shopping center and former Flashback site.
Dollywood- A family launched rollercoaster seems to be in store for Dollywood.
Magic Mountain- Still holding hope for a Colossus upgrade.
Cedar Point-New Dark Ride maybe?
SFA- Maybe a relocation from Great America
Canada's Wonderland- Maybe a good launch
Kings Dominion- Maybe a B&M Invert
Darien Lake- Yet ANOTHER RMC ride that could be in store. Lake Monster appears to be the name of the ride at this time, and it sounds intriguing.

Six Flags makes all announcements on the 29th!

Busch Gardens Williamsburg
I mean C'mon, what doesn't this park have. Griffon, Apollo's Chariot, Alpengeist, Verbolten, are all on my most wanted rides list. Even rides like Loch Ness Monster add to the park. Even though that's all the rollercoasters at that park, From what I've heard there is also a ton of great scenery, and it's run by Sea World so I expect a lot of fantastic themes. I'm looking at maybe making a trip out there soon, so stay tuned for more.
Posted by Unknown at 10:20 AM No comments:

Well Today Full Throttle at Six Flags Magic Mountain opened to the public. I'm a big fan of anything made by Premier Rides, so I'm pretty excited about this ride. I just hope you get a little hang time up at the top of that loop. That's what I love about Mr. Freeze is you get a really good amount of hang time and even a slight pop of air as you exit that top hat. Anyway, excuse my off-topicness, (I swear I'm not ADHD! ;), I think the ride looks pretty good. I do wish it was longer, and the whole hill over the top of the loop kinda seems like a gimmick. Either way, a mulit-launch ride fits in nicely with Magic Mountain's already stellar line up of coasters. Here is POV of the ride. Comment your opinions and review.

Posted by Unknown at 1:23 PM No comments:

Alright guys, here is the situation. If you scroll down to the bottom of my blog you will see my total ride count. Unfortunately, it is not very impressive. I want to be able to post ride reviews from all over the world, but I haven't yet gotten to the majority of parks in the U.S. I will post all the ride reviews I can, but obviously that isn't many. So, having said that, I would like to hear your opinions and reviews from around the world. I will give you credit, or you can remain anonymous. Just email me the review titled by by the ride name followed by ride review. If you wish, you may put your name in the title as well. I will edit this review for spelling errors, but will try to keep it as original as possible. Thanks, and email me at mharrell120299@gmail.com
Posted by Unknown at 10:39 AM No comments: 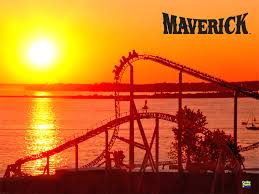 As we waited in line for a much hyped ride, known as Maverick, I couldn't help but get that giddy feeling of glee, but a pit in my stomach as well. This was something completely new. Only a few rides in this world were like this. And boy it didn't disappoint.


As we boarded the comfy Intamin trains, and pulled down the most comfortable OTSR's there are IMO,  I noticed they were running about five trains, which made since because each train was only about three cars long.  Anyway, as they dispatched us from the station, I was surprised by the speed of the lift. I watched it a lot before we got on the ride, but you really can't appreciate it until your on it. As we crested the 105 ft. peak, a brief pop of airtime was followed by my first beyond vertical drop. It was pretty cool, and you could really feel it going almost inside the hill. But, what followed this is almost describable. As we bottomed out of the 95 degree drop, we headed into the hard, heavy banked right turn, and then a left hard banked turn, and then another hard right turn. But your brain can't even compute that. Its just twisty goodness. You then hit a hill full of ejector air. It's one of my favorite parts of the ride. Anyway, as you speed through to the rest of the first half, you continue this kind of sick cycle carousel. You finally slow down as you enter a tunnel. But your not like this for long, as it launches you at 70 mph through the rest of the tunnel. The rest of the ride is kind of a blur. I remember a lot of airtime, and some very interesting inversions, known as the twisted horseshoe roll. We finished with a nice pop of air and a heavily banked turned into the magnetic brakes.


The Maverick at Cedar Point is one of the best rides I've ever ridden. Unfortunately, I haven't ridden many rides of this to compare it to. I really haven't really ridden many rides at all. But I still believe that it is a top notch ride of a high intensity and true uniqueness. 9.5 out of 10
Posted by Unknown at 9:44 PM No comments:

Well guys, I thought I would go ahead and make a post just to introduce you to my blog. I'm from the Dallas/Fort Worth area, so Six Flags Over Texas is my home park. For years it seemed like I was never going to find that one site that just had everything and anything that involved rollercoasters and park's around the U.S. and that's what I plan to bring to the table. I'll be doing ride and park reviews, top tens, most wanted parks, rollercoaster showdowns, and just blogs about things going on in the rollercoaster world. I want to strive to be the best I can be, so constructive criticism is welcome. Thanks, and I'll be posting a ride review soon and probably one a week, and others blog posts once or twice a week. I haven't ironed out the details yet. I'm just running around trying to find the best rollercoasters in the world.
Posted by Unknown at 8:26 PM No comments: